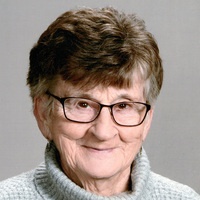 Maggie's last coffee party will be Sunday from 2:00-5:00 p.m. with a prayer service at 4:00 p.m. at Dobmeier Funeral Home in Barnesville, MN. Visitation will resume one hour prior to the mass on Monday.

Maggie was born on October 28th, 1939, in Selz, ND, to Anton and Mary (Volk) Gisi. One of 9 children, she grew up on a farm in a family that always knew the value of hard work, good fun and laughter. After Selz Elementary School, she attended high school in Hankinson, ND, and then joined the convent there. For 8 years, she was Sister Jacinta of the St. Frances Convent in Hankinson. While in the convent, she graduated from Presentation Junior College in Aberdeen, SD with a teaching degree, and taught in several Catholic schools. After leaving the convent, she graduated from University of North Dakota and went on to teach at Washington Elementary School in Moorhead.

She met Loren Willard at a YMCA singles group, and they married 3 months later on June 23rd, 1973, at Nativity Church in Fargo. They made their home in Fargo, and Susan was born 1 year later. She was followed by Julie, and Deb. They moved a few times within the first few years of marriage, finally buying property east of Downer, MN. There they built their home and raised their family.

Maggie enjoyed hard work. On their property, she grew a garden that was way too big for the family so that she could sell produce and run "Maggie's Market". Always loving plants and flowers, she then started selling her extra plants and thus the business became "Maggie's Greenhouse". Her daughters then became known as "Maggie's Girls", a title that stuck for life. She was proud of her family, and often said that raising her family and running the Greenhouse were the best years of her life. When she wasn't working in the garden, she enjoyed making crafts. For several years she held craft/bake sales, where her caramel rolls and caramel corn became legendary.

Maggie loved to laugh and play just as much as she worked. Every year around mid-June, she'd close the greenhouse so there would be plenty of summer left for camping trips. She'd insist there was always enough time and money for family adventures. Whenever she had a free moment, she'd get on the phone with a friend or relative and plan the next outing. She loved to socialize, and loved to laugh - having regular coffee parties, and even "Wild Wednesdays" - the day where she met friends for coffee in the morning, lunch at noon, and tea in the afternoon. Her friends meant the world to her.

Her grandchildren added immense joy to her life. Always the goofy grandma, she loved to spend time with her grandkids, and would always have something fun planned for when they'd visit.

Maggie was a dedicated member of Assumption Catholic Church. She was a woman of strong character and faith. She always said you should "live your faith". Hers was a type of natural kindness recognizing those in need and helping however she could. After retirement, she and Loren moved into Barnesville planning to live out their golden years together. Loren soon suffered a stroke, and Maggie became his devoted caregiver for 14 years. She lived her faith well.

She is proceeded in death by her loving husband, Loren; her parents; brothers, Marvin, John and Jim Gisi; and sister, Leah Gumeringer, and several brothers and sisters-in-law. To order memorial trees or send flowers to the family in memory of Margaret "Maggie" Willard, please visit our flower store.