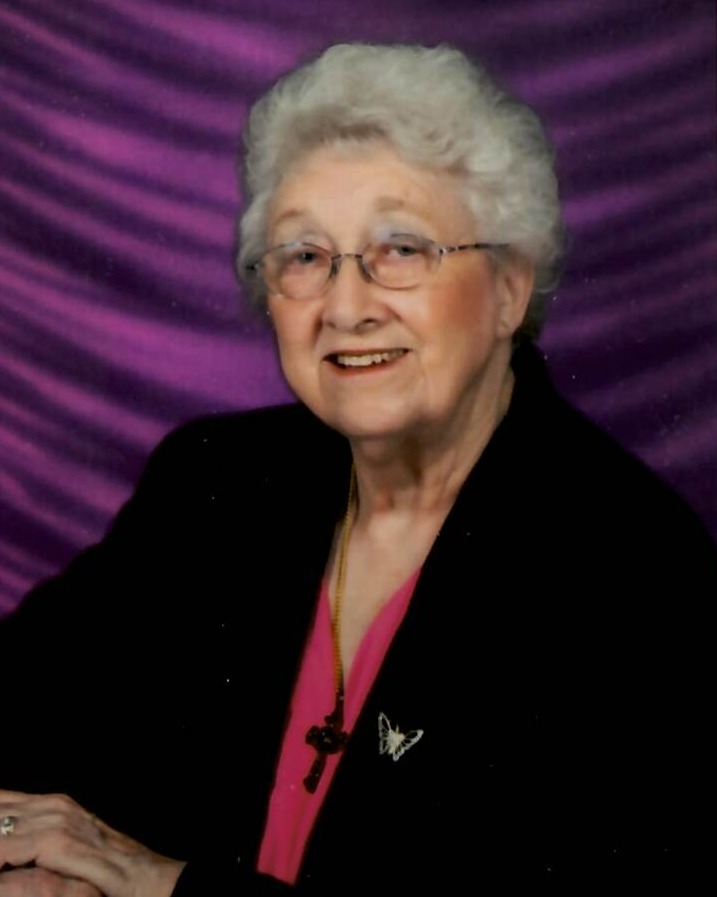 Marilyn June Bruegger was born on February 4, 1933 to George and Myrtle (Foote) Bruegger in Ronneby, MN.  At the age of two years old, Marilyn’s mother died and she continued to be raised by her mother’s parents, Archie and Lula Foote.  She attended school in Spring Valley, WI and graduated from high school there in 1951.

Following high school, she moved to the Twin Cities where Marilyn did office work at the IDS building.  She met Daniel Wolter in 1953 at the Prom Ball Room in St. Paul, and they were married on February 6, 1954.  They started out their married life in the Twin Cities.  From 1962 -1967 they lived in Moorhead.  Marilyn and Dan settled in Barnesville in 1967, and she was a stay at home mom for many years.  They continued to live in Barnesville until 2014, and Marilyn did fulltime home daycare from 1980 to 1992, before they moved up to Moorhead.  Daniel died in 2014, and then Marilyn moved to Eventide Assisted Living in 2017.

She was a longtime member of Assumption Catholic Church, the Guild, Bible Study, Prayer Groups, sang in the church choir.  Her faith was important to her.  One of her treasured accomplishments was when she wrote the family histories of Dan’s side and her (Marilyn’s) side and continued the family tree story entitled “This Tapestry That We Call Family.”  They spent many years together traveling in a motorhome around the United States., wintering in California, Florida, Texas, and several other places.  They rarely missed a family event.  Throughout the years she enjoyed gardening.

She was preceded in death by her husband Daniel in 2014, her parents, step mother Norma Bruegger, brother Jim Bruegger.

Marilyn Wolter died on Monday, October 24, 2022 in the Eventide Nursing Home in Moorhead.

Mass of Christian Burial will be 11:00 AM, Wednesday, November 2, 2022 at Assumption Catholic Church in Barnesville with Father Todd Arends presiding.  Visitation will be one hour prior to the funeral service on Wednesday.

The family would like to thank Eventide and Ethos Hospice for their love and care given to Marilyn.

To order memorial trees or send flowers to the family in memory of Marilyn Wolter, please visit our flower store.