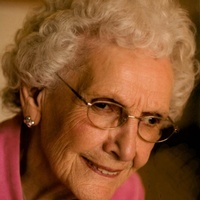 Marjorie Matejka, 99, passed away with her family by her side on Thursday, March 15, 2018 at Eventide Nursing Home in Moorhead.

Memorial services will be 11:00 AM, Tuesday, March 20, 2018 at Our Saviors Lutheran Church in Barnesville, with Rev. Chris Leach officiating.  Burial will be in City Cemetery, Barnesville.

Marjorie “Marge” LaVerne Boyce was born on June 12, 1918 in Absaraka, North Dakota to Herman and Lidia (Hagemiester) Boyce.  She attended school and grew to womanhood in Absaraka, graduating from Absaraka High School in 1936.  She attended Interstate Business College in Fargo and later worked at the Fargo Clinic.  On November 29, 1944, she married Arnold “Nick” Aamodt in Fargo.  They made their home in Fargo until 1951 when they moved into Barnesville.  Marge was a homemaker and mother of two sons.  Mr. Aamodt died on January 30, 1967.  After her husband’s death, she returned to work at the Fargo Clinic until 1974.  On February 16, 1974, she married Emil Matejka in Barnesville.  The couple made their home in Barnesville.  Marge worked at the Library in Barnesville and then for many years at the Atkinson Elementary School in Barnesville as the school librarian.  She encouraged a love of reading for many students throughout the years.  She retired the spring of 1988.  Marge continued to live in Barnesville.  For the past several years, Marge has lived at Eventide Home in Moorhead.

She has been an active member of Our Savior’s Lutheran Church, Barnesville where she taught Sunday School for many years.  She is also a member of the VFW Post 4628 Auxiliary, The Maurice E. Masterson American Legion Post 153 Auxiliary of both Barnesville and the Eagles Auxiliary of Fargo.

In lieu of flowers memorial are preferred to Our Saviors Lutheran Church in Barnesville.