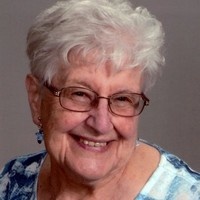 Marlys Heng, 87, was diagnosed with pancreatic cancer in December of 2019, and passed away on Friday, March 6, 2020, in her home in Barnesville, MN with the loving hands of Hospice of the Red River Valley.

Funeral Services will be 11:00 AM, Tuesday, March 10, 2020 at Our Saviors Lutheran Church in Barnesville, with Rev. Chris Leach officiating. Burial will follow in Zion Cemetery, Skree Township, rural Downer, MN.

Visitation will be from 5-8 PM Monday at Dobmeier Funeral Home in Barnesville with a Prayer Service at 7:00 PM. Visitation will continue for one hour prior to the funeral service on Tuesday.

Marlys Joy Logan, daughter of Thomas and Minnie Logan was born on January 13, 1933, on the Grant farm in rural Glyndon, MN. She grew up in Moorhead, MN, attending school in Moorhead, graduating in 1950. On June 17, 1951 she married Stanley Heng of rural Barnesville. They lived east of Downer on the Haberle farm, and later lived on the Charles Kluck farm. In 1952, their son Tom was born, followed in 1953 by Jim, and Kenneth in 1954. Stanley and Marlys summer fallowed for the next 10 years. After that three more children joined the family; Connie Cae in 1962, Larry in 1963 and Dean Stanley in 1966. Dean had Cerebral Palsy and spent his almost sixteen years in a wheelchair. He was called their Peace Maker and considered themselves lucky to have had him that long.

Stanley and Marlys milked cows, had sheep, pigs, geese and hundreds of chickens. Marlys candled and sold eggs and became an expert on canning chickens.

After moving into town, Stan got into wood working and Marlys painted his projects. They sold and gave away a lot of those projects. After Dean passed away in 1982, because Marlys enjoyed people, she worked with Evie Pender at the Sales Barn in Fergus Falls, the Wagon Wheel Restaurant and Eagle Cafe.

Marlys enjoyed playing cards, jigsaw and crossword puzzles, crocheting and embroidery, selling many dish towels. She would play cards and games every chance she got.

Enriching Marlys; life to the fullest included many outings with her kids. Many Mother's Day outings with the girls - whoever was free to go; daughter, daughters-in-law, granddaughter's, or great granddaughters. They had a lake weekend; Chanhassen Theater weekend; Twins games, Junkyard, and Doolittles for lunch and a movie weekend at Kelly's, where they line danced (on Marlys bucket list) and other things. Marlys loved shopping in Fargo at all the little shops. They tried the Escape Room; from which they didn't escape. The evening included getting a picture taken of the losers, and to complete the night, Trish broke her foot. The girls took in a Toby Keith Concert, which was another thing on Marlys bucket list. A plane trip to Florida with the girls, was also on the list of what they did. Another highlight was a trip with second family the Hoekstra's to Wisconsin to see Danny O'Donnell. Maryls's Memorial Folder
To order memorial trees or send flowers to the family in memory of Marlys Heng, please visit our flower store.