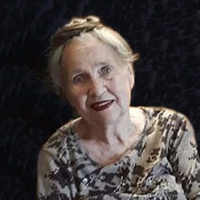 Martha Marie Hines was born August 6, 1936 the daughter of Wayne and Martha (Holte) Hines in Foxhome, MN. In February of 1955 she was united in marriage with Floyd Gene Irwin. Martha and Gene lived in Texas and in Duluth while Gene was in the Air Force. After serving in the Air Force, Martha and Gene moved to Barnesville where they owned and operated the Travelers Inn until 1980. Gene died on August 6, 1992.

Martha loved to volunteer at the Valley Care and Rehab in Barnesville, especially playing bingo with the residents. One of her greatest joys was to go to garage sales. Through the years Martha owned numerous dogs and she always named her dogs Lady.

Martha was preceded in death by her parents, husband Gene; brother Irvan; and great-granddaughter Anna.

Family graveside services will be held at a later date and time.

Please keep Martha's family in your thoughts and prayers.

To order memorial trees or send flowers to the family in memory of Martha Irwin, please visit our flower store.