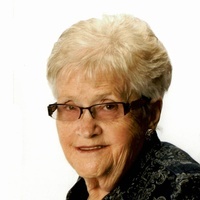 Mary Ann Thompson, 85, died on Monday, May 14, 2018 at Essentia Hospital in Fargo.
Funeral Services will be 11:00 AM, Monday, May 21, 2018 at Rollag Lutheran Church in Rollag, MN with Rev. Jim Greene officiating.  Burial will follow in Rollag Lutheran Cemetery.
Visitation will be Sunday 5-8 PM, at Dobmeier Funeral Home in Barnesville with a Prayer Service at 7:00 PM.

Mary Ann was united in marriage to Eldon Jerome Thompson on July 20, 1957 at Trinity Lutheran Church in Pelican Rapids. They made their home and raised their family on the Thompson Family Farm located east of Barnesville. Mary Ann assisted Eldon with the needs of the farm and occasionally drove school bus for Barnesville Public Schools. She also worked as an independent distributor for Fuller Brush. For nearly 40 years, Mary Ann and Eldon wintered in Apache Junction, Arizona. In 1995, they sold the farm and moved to Barnesville. For many years, Mary Ann worked at the Willow Creek Golf Course in Barnesville.

Mary Ann was incredibly active in the community. She was an active member of the Rollag Lutheran Church, Ladies Aid, Women’s Circle, and Western Minnesota Steam Threshers Reunion. She was also involved with 4-H, Homemakers Club, HELPERS, and was a member of the Barnesville Thursday Nite Lions. Mary Ann was so involved in her community that she was named the 2008 Clay County Outstanding Senior Citizen. Flowers and gardening were her other passion. She spent countless hours working on her garden and flowers and keeping them beautiful. Mary Ann passed her love of flowers down to her grandson Codey, who is doing the family floral arrangements for his grandma’s funeral.

Mary Ann will be greatly missed by her family and friends and remembered for her strong work ethic, her selflessness, her strong faith, and her dedication to her church and community.

Mary Ann was preceded in death by her parents, and a great granddaughter Adeline Rosenfeldt.