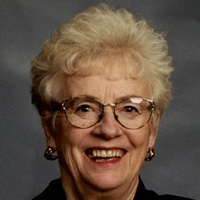 Funeral services for Mary B. (Marquart) Trowbridge will be held 11:00 AM on Wednesday, July 1, 2020 at St. Cecilia's Catholic Church in Sabin, MN with Father Todd Arends presiding.  Interment will follow in Comstock Cemetery.

Mary B. Trowbridge died Wednesday, April 29, 2020 at Essentia Hospital in Fargo, ND. She was 89. Mary was born to Albin and Cecelia Marquart on February 14, 1931 in Fargo, ND where she grew up and went to school. She attended Sacred Heart Academy (Shanley) graduating in 1948. She graduated from Concordia in 1951, majoring in Vocal Music and minored in English. She then attended the Cincinnati Conservatory where she earned a Masters degree in Music in 1952. She later earned a B.S. degree in Education from Moorhead State. While studying at MSU she taught high school music at Dilworth.  She also taught at Breckenridge and, briefly, in Barnesville before marrying. Mary was an accomplished singer. She sang at many weddings and funerals in the area. Her children have fond memories of hearing her practice after being put to bed, when she finally had some free time.

On November 10, 1956 Mary was wed to Perry Trowbridge in Saint Mary's Cathedral in Fargo, ND. They made their home in rural Comstock, MN where Perry farmed. They raised eight children there, and Mary worked very hard as a housewife with this bunch. She went back to teaching music part-time as the children entered school; first in the Foxhome area and then at Kent, before taking a full-time position at St Francis de Sales in Moorhead. She then worked for Moorhead Public Schools at Sabin and Georgetown, Probstfield Elementary, and finally at Edison, before retiring in 1996.

Mary was very active in a wide variety of community service—from directing the church choir at St Cecelia's for decades, continuing at Assumption church in Barnesville until arthritis made it too painful; serving as leader of the Red River Ramblers 4-H club in Comstock, directing Christmas programs at Comstock Lutheran Church, serving three terms on the Barnesville School Board, which allowed her the joy of handing diplomas to her youngest children, serving two terms on the MN Academic Excellence Foundation, and countless other service opportunities. Perry and Mary moved off the farm into a town house in Barnesville in 2002 where they lived out their lives. In Barnesville she volunteered with Barnesville Helpers, and became an active member of the American Legion Women's Auxiliary. She took special pride in her work promoting patriotism and the school essay contest, as well as the Junior Auxiliary to which she recruited several of her grand-daughters.

Mary was preceded in death by her husband Perry; siblings Eugene, Dorothy, and Ceil; and son Neil.

Mary will be buried at the Comstock Cemetery next to her husband Perry and son Neil.

In lieu of flowers, memorials may be given to the Barnesville High School BEST (scholarship foundation). Mary's Memorial Folder
To order memorial trees or send flowers to the family in memory of Mary B. Trowbridge, please visit our flower store.