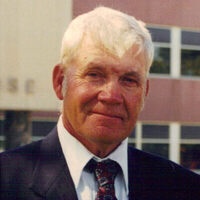 Merlyn Tyler Bekkerus passed away Friday, February 4th, 2022, at the age of 89 at Valley Care and Rehab in Barnesville with family at his side. A funeral service will be held at 2:00 Thursday, February 10, 2022, at Dobmeier Funeral Cremation Service with Pastor Marlin Ackerson officiating. Visitation will be one hour prior to the funeral service. Burial will follow in City Cemetery, Barnesville.
Merlyn was born on July 30, 1932, to Albert and Hilda (Skogen) Bekkerus in Pelican Rapids, MN. He grew up and spent the remainder of his life on the family farm east of Barnesville until moving to the nursing home in 2017.
At the age of 19, Merlyn was trampled by a bull at the farm, which left him with serious injuries including a broken neck, crushed shoulder, and nerve damage leading to lifelong disabilities. He spent many weeks recovering at St. Ansgar Hospital in Moorhead. Doctors felt at the time Merlyn could not have children due to his injuries. Merlyn is survived by all nine of his children.
Merlyn married Etta Gilbertson in 1956 at Gran Lutheran Church in Clay County. Despite Merlyn's physical limitations, he and Etta started a family and operated the family dairy, beef, and grain farm until they divorced in 1989. The dairy herd was sold at that time and Merlyn continued with beef and grain operations. Merlyn often provided custom corn chopping for neighboring farms. He also served as a supervisor on the Humboldt Township Board for over 30 years.
One of Merlyn's favorite pastimes was going to auction sales. He loved to visit with acquaintances and folks he just met, easily starting conversations with strangers. He had a great memory to recall details he learned about people he met. He was also well known for bidding on the last auction items no one else wanted. He spent many days over the years having coffee and visiting at J & S Farmers Mill in Barnesville. He had a witty sense of humor and was known for his quick come-back lines or jokes that always had folks laughing.
Merlyn is survived by his children and their families: Larry (Marcie) Bekkerus, Englevale, ND; Judy (Lee) Schobinger, Sheldon, ND; Ronald (Joanne) Bekkerus, Glyndon, MN; Della (Tom) Callahan, Glyndon, MN; Becky (Jay) Leitch, Barnesville, MN; John Bekkerus, Glyndon, MN; Christine (Steve) Glatt, West Fargo, ND; Teresa (Keith) McGough, Glyndon, MN; and Michael (Melissa) Bekkerus, Hawley, MN; brother, Alan Bekkerus, Grand Forks, ND; 15 grandchildren, 8 great-grandchildren, nieces, nephews, and friends.
He is preceded in death by his parents; sisters: Arlene Gilbertson, Claudia Gilbertson, and Harriet Tillotson.
The Bekkerus Family would like to extend their sincere gratitude to the Valley Care and Rehab staff for their excellent and compassionate care for Merlyn during the past five years. Funeral services arranged by Dobmeier Funeral & Cremation Service, Barnesville, MN.

Meryln's Memorial Folder
To order memorial trees or send flowers to the family in memory of Merlyn Bekkerus, please visit our flower store.