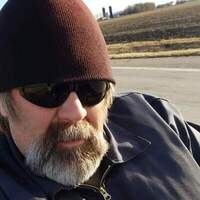 Funeral services will be 11:00 AM, Tuesday, December 8, 2020 at St. James United Church of Christ in Barnesville, MN with Rev. Frank Picard officiating. Burial will follow in Rosemound Cemetery, Barnesville. Attendees are reminded to follow social distancing and wear a mask.

Visitation will be from 5-8 PM, Monday, December 7, 2020 at Dobmeier Funeral Home in Barnesville.

Michael Robert Wagner was born on May 12, 1966 to Robert Roy Wagner and Gloria Poehls. He was baptized at St. James Church. He grew up in Barnesville and Moorhead, and his grandmother Lois Wagner was very close to him. Mike graduated from Barnesville High School in 1984. Following high school he attended Wahpeton Science School and earned his certificate in Diesel Mechanics. Following his education, Michael and his dad purchased a semi and he started out as an independent trucker. He was married to Joan Nelson and to this union one son Michael D. Wagner was born. Throughout his life, Mike drove truck for several different companies including Kost, Kamas, and Elliot. He later went on to drive truck for other companies including SuperValu and Fargo Glass and Paint. Most recently, he was driving truck for Newman Trucking out of Clifford, ND hauling sugar.

Mike loved to fish on all the area lakes. He spent lots of time ice fishing with his son Michael. They would sometimes disappear for a week at a time on fishing and snowmobile trips. He was also a huge car and tractor buff. He enjoyed restoring classic cars, refinishing tractors, and riding his Harley-Davidson. He liked to reach out and call friends while on the road; it didn't matter if it was in the middle of the night.

He was preceded in death by his grandparents Edmond and Lois Wagner, Robert and Beverly Poehls, and uncle Punky Poehls.