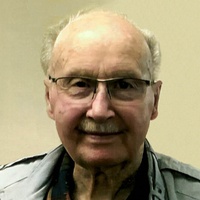 Milton Eugene Sorum was born on March 25, 1929, at a Moorhead hospital to Melvin and Martha (Nygaard) Sorum.  He was baptized at Gran Church.  He was confirmed at Our Savior's Church in Barnesville. He attended his first grades at rural schools and by the 7th grade started at Barnesville High School, graduating from Barnesville in 1947. Milt worked at several local jobs in Moorhead, until July 7, 1953, when he started driving for Northland Greyhound working out of Milwaukee, Chicago, Minneapolis, and Fargo.

On June 7, 1955, Milton was united in marriage to Marilyn Dixon in Beach, ND. They moved to Chicago and lived there until 1956, when they moved back to Minnesota. He started his farming years with a poultry operation. In 1979, they moved to Moorhead and he started driving bus for a local charter company. He always loved to drive.  In 1987, he started driving semi coast to coast. In 2005, Milton retired his driving career because of his heart. Milt’s life was surrounded by visiting and talking, and he always had a story or three to share.

He leaves his wife of 66 years, Marilyn Sorum of Fargo, ND; one sister, Marion Haugrud of Barnesville, MN; sister-in-law, Teresa Depuew, of Waverly, IA; and many nieces and nephews. He is preceded in death by his parents; son, Gary; brother, Gordon; and brothers-in-law, James Dixon and Harold Haugrud.

Memorial services will be 11:00 AM, Thursday, June 10, 2021, at Our Saviors Lutheran Church in Barnesville with Rev. Chris Leach officiating. Visitation will be for one hour prior to the service at the church.  Inurnment will be at a later date in City Cemetery, Barnesville, MN.