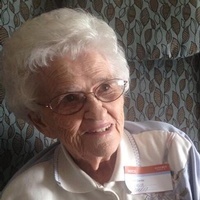 Mass of Christian Burial will be 11:00 AM, Friday, July 13, 2018 at Assumption Catholic Church in Barnesville, MN with Father Gary LaMoine presiding.  Burial will follow in St. Mary’s Cemetery, Barnesville.

Visitation will be 5-8 PM, Thursday, July 12, 2018 at Dobmeier Funeral Home in Barnesville, MN with a Prayer Service at 7:00 PM.  Visitation will continue for one hour prior to the service on Friday.

Orpha Edna Garrison was born on July 25, 1921 to Ralph Harry and Nora Randa (Gilbertson) Garrison on a farm near Barnesville, MN.    She attended country school and Gran Lutheran Church.  Her mother died when she was 14 years old and she and her older sister helped raised her younger siblings.  In addition she worked at her uncle’s restaurant.
Orpha was united in marriage to George Kunz on November 1, 1943 in Crookston, MN.  The couple spent the first winter in Texas.  In 1944, they returned back to Barnesville where Orpha has made her home ever since.   Orpha worked many different jobs in the Barnesville area including picking potatoes, the Galaxy Supper Club, and for 25 years at Firehall Liquors until retirement at age 75.

Orpha was a member of Assumption Catholic Church where she served communion well into her 90’s, the VFW and American Legion Auxiliaries.  She was active in her community throughout her life, volunteering at the nursing home, delivering meals on wheels into her 90’s, and many other activities.   She also enjoyed to knit and crochet.

She was preceded in death by her husband George on June 6, 1986; her parents; four sisters: Norma Nygaard, Ruby Dunham, Pearl Everhart and Celline McReynolds; and one brother, Ralph Garrison Jr.