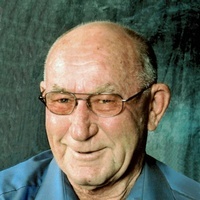 Raymond Kemper, 87, died on Tuesday, June 5, 2018 at his home surrounded by his loving family.
Mass of Christian Burial will be 11:00 AM, Saturday, June 9, 2018 at Assumption Catholic Church in Barnesville with Father Gary LaMoine presiding.  Burial will follow in St. Mary’s Catholic Cemetery, Barnesville.

Visitation will be 5-8 PM, Friday, June 8, with a Prayer Service at 7:00 PM, at Dobmeier Funeral Home in Barnesville.  Visitation will continue for one hour prior to Mass on Saturday at the church.

Raymond Carl Kemper was born on May 23, 1931 to Joseph and Bernadine (Austing) Kemper in Grey Eagle, MN.  He grew up in Melrose, MN where he attended school.  As a young lad, he worked for his sister and brother-in-law on their family farm.  He served his country in the US Army during the Korean War.  He returned to Minnesota and worked for Swedburg Construction as a brick tender.  He was married to Dorothy Helena Derichs on September 27, 1960 at St Peter and Paul Church in Elrosa, MN.  They started out in Little Falls, MN for a year and then moved to Barnesville in 1962 where they remained and raised their family.  He then worked for Meinecke-Johnson Construction and then for Haugen Masonry as a brick layer for over 30 years before retiring.
Ray was a member of Assumption Catholic Church, Knights of Columbus, and the Barnesville Rod N Gun Club.  Ray enjoyed fishing, hunting, woodworking and gardening.  Keeping up his yard was a priority.  His pride and joy was his family and the time they spent together.  He also enjoyed playing cards, and taught his family the game solo.
Ray is survived by his wife of 57 years, Dorothy; four children:  Mike (Char) Kemper, Patty (Ed) Gilbertson, Mark Kemper and Mary Jo Valnes; 9 grandchildren: Christopher (Jen) Kemper, Cory (Sarah) Gilbertson, Becky (Mark) Torkelson, Justin (Cami) Gilbertson, Josh (Tiffany) Kemper, Katie (Tracy Jerald) Kemper, Nick (Marissa) Kemper, Taylor (Emily) Valnes, and Tanner (Carissa) Valnes; 13 great grandchildren: Kennedy, Paisley, Carter, Grace, Emma, Lily, Colton, Cambree, Harvey, Walter, Kason, Ainsley, and Karsyn; 6 sisters: Sally, Loretta, Adeline, Delores, Irene, and Marina; and a brother, Marvin.  Ray is also survived by several nieces and nephews, other relatives and friends.
He was preceded in death by his parents; 3 sisters: Viola, Helen and Dorothy; his brother, Rich; and a granddaughter, Danielle Rae Valnes.