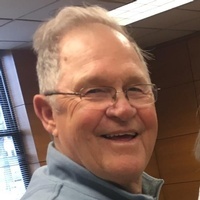 Richard Peppel, 76, died on Saturday, September 29, 2018 in the VA Hospital, Fargo with his family by his side.

A Celebration of Life will be 2:00 PM, Monday, October 8, 2018, at St. James United Church of Christ, Barnesville, MN with Rev. Frank Picard officiating.

Visitation will be one hour prior to the Celebration on Monday.

Richard Leroy Peppel was born on June 11, 1942 to Clayton and Elsie (Weis) Peppel in Barnesville, MN.  He attended school and graduated in 1960 from Barnesville High School.  Following graduation, he farmed with his family before serving his country in the US Navy in 1963.

He married Phyllis Margaret Anderson on October 9, 1965 and celebrated 52 years of marriage.  To this union six children were born.  They made their home in rural Barnesville for a couple of years before moving to the Peppel Family Farm.  He farmed with his father and brother for many years.  He was an avid hunter, fisherman, and had many long tales about his adventures.  He was active throughout his life in many things including: the Barnesville Township, St. James United Church of Christ, Booster Club, Jaycees, and the Rod N Gun Club.  Grandpa Richard was always very active with his grandchildren.  They treasure their times of Wednesday night suppers, rides in the pick-up truck, his sense of humor, one liners, and “lack of filters.”

He was preceded in death by his wife Phyllis in March of 2018, his parents and a sister Mary (Peppel) Anderson.

In lieu of flowers memorials are suggested to St James Church or the Fargo VA Voluntary Services.  When remembering Richard and Phyllis, we would recommend dining at the Snap Dragon in Moorhead.  A special thank you to the Fargo VA and all of the wonderful services and care they have provided over the years.

To order memorial trees or send flowers to the family in memory of Richard L Peppel, please visit our flower store.