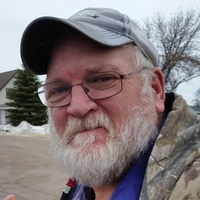 Roger Dean Lewis was born on March 27, 1954, to Edward and Evelyn (Johnson) Lewis Moorhead, MN. When Roger was a child, he hid in the backseat of his parents car, who were going on a trip. A few miles down the road he popped up his head and said, I 'neaked' along. Neak soon became a lifetime nickname that has stuck with him for over 60 years.

Neak worked road construction in his younger years. His talent was in masonry and he worked as a mason with many different people and on many different projects through his lifetime. He loved the time he spent at the hunting shack. Neak will be remembered for his huge garden, his generosity with produce, and his helping hand. Neak will also be remembered for never having a shortage of words and his quick wit. Neak's friends will forever remember gathering in the garage, throwing back some cold ones, and laughing.

Roger was preceded in death by his father Edward; and 2 brothers, Keith and Bruce.