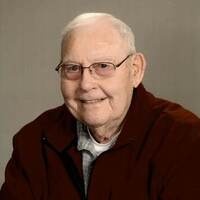 Roger Plath, age 91, of Barnesville, MN died on Tuesday, October 19, 2021, at the VA Medical Center in Fargo, ND from complications of Covid 19.

Memorial services will be 10:00 AM, Saturday, October 23, 2021, at Our Savior's Lutheran Church in Barnesville, MN with Rev. Chris Leach officiating. Burial will follow in City Cemetery, Barnesville, MN with Military Honors provided by the Honor Guard of the American Legion and VFW Posts.

Visitation will be 5-8 Friday at Dobmeier Funeral Home in Barnesville, with a Prayer Service at 7:00 PM. Visitation will also continue for one hour prior to the funeral service on Saturday.

On September 22, 1930, Roger Robert Plath was born on the family farm in Yellow Medicine County, MN. He grew up on the family farm and attended school in Wood Lake, MN.  During high school, Roger lettered in six-man football, basketball, and baseball. Following graduation, he worked locally before joining the Air Force. He worked as a mechanic on the airplanes and was stationed in Texas and California.

Following his service to his country, he returned home to Wood Lake, MN and started a job at the creamery in Granite Falls. This is where he met Mary Ann Arneson and they were married on February 22, 1952. They started out their married life living above the creamery where they had the entire upstairs as an apartment. He took a job with Midland Fertilizer in Park River, ND as manager before being transferred to Barnesville, MN in 1963. The fertilizer plant was sold to the Barnesville Farmers Elevator where he remained manager until 1985. For the next 10 years, Roger worked at Stenerson Lumber in Moorhead.

Roger served on the Barnesville Fire Department for 20 years and was also Fire Chief for part of that time. He served on the Barnesville City Council for eight years, and lastly on the HRA Board as President for over the past 20 years.  He was a member of Our Savior's Lutheran Church and he and Mary Ann worked as church custodians of Our Savior's Lutheran Church for over 25 years.

Family time and celebrating together meant the world to Roger. Some of his favorite past times through life have been golfing with his buddy Zeke Pender, camping at Meadow Lake, and watching his family at sporting events. He has also been active in the Senior Citizens and enjoyed playing cribbage, whist, pinocle, and bridge. It was generally five o'clock somewhere with the Sacrison's. He treasured his friendships he formed with many of the neighbors throughout the years.

He was preceded in death by his wife of 60 years, Mary Ann; daughter, Janice Plath; his parents; a sister, Yvonne Ellingson; two brothers and sister-in-law, Melvin (Eugenia) Plath, and Roland Plath. Roger's Memorial Folder
To order memorial trees or send flowers to the family in memory of Roger Plath, please visit our flower store.