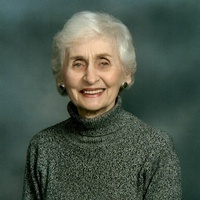 Ruth Marie Wohlwend was born to Kate (Meyer) and Walter (Pike) Wohlwend on Thanksgiving Day, November 24, 1927. She grew up in Barnesville, attended the Barnesville Elementary School and graduated from Barnesville High School in 1945. From there she attended Aaker’s Business College in Grand Forks. She was a whiz at typing and shorthand and was first employed by Great Northern Railroad in Grand Forks.  She then lived in Carbondale, Illinois for two years while Jim taught at the university there. Subsequently, she became an executive secretary at Gamble Robinson in Fargo until she married James Pasch on June 24, 1948. Ruth spent the next several years in Barnesville doing what she loved best –being a supportive wife, a wonderful mother and staunch friend.
Ruth loved Barnesville—especially its people. It was place where she could walk uptown for coffee, run into friends wherever she went, and where people helped and looked out for each other. She served her community by acting as an election judge for several years and serving on the Board of Directors of the HUD development.
She also loved her church and attended Mass every day that she could. Her faith played a critical part of in her life and she gave back by singing in the choir, serving on the Guild, volunteering for the church decorating committee, attending Bible study and praying for others as a member of the prayer group.
People were drawn to her as she was a beautiful person, both inside and out. Strangers would stop to compliment her and would sit next to her and tell her their problems or life story. She had a natural wisdom that was greatly appreciated by both friends and strangers. She faced her own adversities with humor and dignity. Ruth made the world a better place just by being in it and many will miss her now that she is gone.
She is preceded in death by her husband James, and two still-born twin daughters Margaret and Maureen. She is survived by her three daughters, Mary (John) Iverson, Joan (Curt) Houston and Ann Pasch. She also leaves behind her two grandsons Michael Iverson and James (Jill) Iverson and great-grandchildren Makena, Ivy, Iyla and Thatcher.