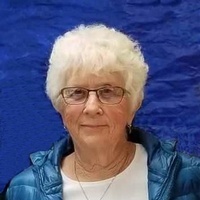 Sally Braton, died surrounded by the love of her family on Tuesday, April 16, 2019 at her home in Barnesville.

Visitation will be 5-8 PM, Friday April 19, 2019 at Dobmeier Funeral Home in Barnesville. Visitation will also be held for one hour prior to the funeral service.

Sarah “Sally” Rogenia Wibe was born on November 13, 1936, to Alf and Ella (Peake) Wibe in Rollag, MN. She began her life on a farm near Rollag, and then as a young girl her family moved to Barnesville.& She attended school in Barnesville and graduated in 1954. After high school, Sally worked as a nurse’s aide at St. John’s Hospital in Fargo.

Sally was united in marriage to Donald Braton on October 12, 1955 at Our Saviors Church in Barnesville. They made their home a mile from where Donald grew up and returned to the original family farm in 1958. Through the years, Sally worked on the farm with her husband and family.

She loved her grandchildren and great grandchildren. Her hobbies included bowling, sewing, and reading. For over 40 years, she met up with her morning coffee friends.