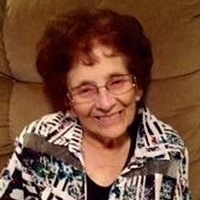 Funeral services will be 2:00 pm, Friday, April 20, 2018 at St. James United Church of Christ with Pastor Pete Ackerson officiating.  Burial will follow in City Cemetery, Barnesville, MN.
Visitation will be held from 5-8 PM, Thursday, April 19, 2018 at Dobmeier Funeral Home in Barnesville with a Prayer Service at 7:00 PM.  Visitation will continue for one hour prior to the funeral at the church.

Sodonna Marie Severson was born on October 6, 1931 to John and Minnie (Thrane) Severson at their home in Barnesville, MN.  She grew up and attended school in Barnesville, graduating in 1948.  In her youth, she worked alongside her father at the Barnesville Creamery.  In 1948, she married Arvid Solum and to this union four children were born: Renae, David, Dennis, and Rolayne.  In 1956, they moved to Freedom, CA where Sodonna worked various jobs including manager of the Farm-Milk Store.

Sodonna was married to Pat Earl Gamel on May 17, 1970 in Carson City, NV.  They made their home in Watsonville, CA and nine children were added to the family, who she loved and raised as her own.  Pat and Sodonna moved to Barnesville in 1973, where she was caretaker of her mother Minnie.  She was a caretaker of many.  She loved all of her family and friends and her Lord and Savior Jesus Christ with her whole heart.  She was a lifelong member of Assembly of God Church and taught many children in Sunday School where she shared her love of God and Faith.

Sodonna's Memorial Folder
To order memorial trees or send flowers to the family in memory of Sodonna Gamel, please visit our flower store.