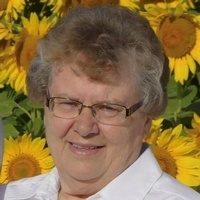 Sophie Swenson, 74, of Barnesville, MN went to her heavenly home on the afternoon of Friday, October 12, 2018 with her loving family by her side.
Funeral services will be Saturday, October 20, 2018 at 11:00 AM in Hope Lutheran Brethren Church, Barnesville, with Reverend Kevin Skaret officiating. Burial will be at Rollag Lutheran Cemetery, Rollag, MN.
Visitation will be Friday, October 19 at Hope Lutheran Brethren church from 5-8 PM with a prayer service at 7 PM. Visitation will continue one hour before the funeral on Saturday.
Sophia Ann Meier was born on October 26, 1943 in Zeeland, ND; the daughter of Ben and Magdalena (Krumm) Meier.  She attended a country grade school and graduated from high school at St. Francis Academy, Hankinson, ND. After graduation from high school, she entered the St. Francis Convent.  During that time, she received her associate degree in Occupational Therapy.  After following the Lord’s calling, she left the convent.
On November 5, 1977, Sophie married the love of her life, Donald Swenson, in Fargo, North Dakota.  Donald and Sophie made their home in Barnesville. In 1978 they moved to their farmstead in Rollag, MN. Sophie was a loving farm wife and mother, who stayed home to help Donald on the farm and to raise her boys until they started attending school. She then spread her love for people by working at the Barnesville Care Center; now ValleyCare and Rehab; at the Hawley Manor and continued to serve and love others as a Home Health Aid until the time of death. Donald passed away on July 26, 2002. In 2007, Sophie moved to Barnesville where she currently resided.
Sophie was a member of Hope Lutheran Brethren Church in Barnesville, where she was a true servant of Christ by always stepping up to fill many ministry needs with her whole heart. Sophie’s passion was a love for people; she loved everyone, something that was so evident in her life. Her mission in life was to make sure that everyone she met would have an opportunity to experience accepting Jesus Christ into their lives to know Him as their Lord and Savior. She loved to play Pinochle and spend as much time as she could with “the boys”, her grandsons.
Sophie is survived by her two sons and daughters-in-law, Eric and Mandy, and Joseph and Lauren and their sons, Oliver, Corban and Toby Swenson. Eight brothers and three sisters, along with their spouses, numerous nieces and nephews also, survive Sophie.
She was preceded in death by her parents, her husband, Donald and one brother, as well as two sisters-in-law.
Sophie broke free from the pain and her battle with cancer, and is now walking by sight with her Jesus!
Memorials will be given to a new missionary school in Chad, Africa. Donations can be written to Hope Lutheran Brethren Church, Barnesville in memory of Sophie.