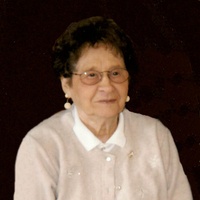 Visitation will be for one hour prior to the funeral service at the church.

She was baptized September 4, 1921, at her home. On December 27, 1936, she renewed her baptismal covenant in the Rite of Confirmation at Immanuel Lutheran Church, Callaway. Following Confirmation, she taught Sunday School for several years.

Her first earned money was a dollar a day, working at Camp White Earth, a summer camp for boys on White Earth Lake near Waubun, MN.

For seven years she taught rural schools in Becker, Waseca, and Clay Counties in Minnesota. In 1950, she began teaching elementary grades at Dent, Audubon, and Browns Valley, MN. The last 23 years of teaching took place at Barnesville Elementary School. She took an early retirement in 1984.

From 1961-1976, Mrs. Miller's fourth grade students wrote a three-paragraph letter to her at the end of the school year. In 2008, and 2015, she reread those paragraphs and commented, "several pleasurable hours were enjoyed-was amazed how well they expressed opinions and gratitude-such good sentence structure and spelling-wonderful handwriting." All in all, she didn't regret teaching for 40 years.

Vivian and Arthur Miller were married at the Little Brown Church in the Vale, Nashua, Iowa. They lived in Browns Valley, MN for six years during the school year and spent the summers on the family farm at Ada, MN. In 1961, they moved to Barnesville and continued spending summers at the farm until 1983.

Vivian reminisced of all the places visited with her family, in 1977, Barrow Alaska was the most unique. She spent much time and effort assembling scrapbooks and photo albums. She was especially proud of her coin collection. In the 1980's and 90's, time and concern was given sharing and caring of her elderly parents so they could remain in their home.

Vivian was a member of St. John's Lutheran Church in Barnesville and the Lutheran Women's Missionary League (LWML).

Vivian was preceded in death by her parents; husband, Arthur in 2000; sisters, Doris Berglund Geyer, and Rhonda Hanson.