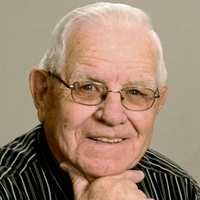 A Celebration of Life for Wally will be held on Thursday, August 13, 2020 at 6:00 PM at St. Mary's Catholic Cemetery in Barnesville.  Father Todd Arends will preside and military honors will be given by his fellow comrades from the Honor Squad.

Following the service at the cemetery, everyone is invited to a social distancing picnic at McGrath Park in Barnesville.  Bring a lawn chair, your appetite, and a story to share with the family about Wally.

Wally Stetz, 87, of Barnesville, MN died on Thursday, April 2, 2020, at Sanford Hospice House, Fargo, after suffering a stroke a few days prior.

Wallace Benedict Stetz was born on December 15, 1932, to John and Helen (McDunn) Stetz in Wilkin County, MN. He grew up on the family farm in Atherton Township, outside of Barnesville. He attended school in Barnesville. As a young boy, he stayed at home to help his dad on the farm.

He entered the US Army and served as a cook during his time. He returned home and worked for a local farmer before eventually buying his own farm that he tended too until his retirement.

He was united in marriage to Lucy Marie Sauvageau on June 18, 1957, at St. Joseph's Catholic Church in Moorhead. They made their home and farmed near Barnesville, where he lived until the time of his death.

Wally was an active member of Assumption Catholic Church, and the Knights of Columbus, where he was also a member of the choir. He enjoyed time volunteering at the Steam Threshers Reunion. He also was active in the American Legion in Barnesville, where for many years, he cooked the famous Saturday night steaks, helped organize and cook numerous stags and fundraisers. Wally was also active with the Honor Guard, where he honored many lives of the fallen veterans, who had gone before him. He served on numerous committees at the Legion, including commander. He also served on the Atherton Township Board, and the Red River Telephone Board.

Wally enjoyed a weekly trip to the casino. He had a massive garden and his greatest joy was sharing his produce with many. He also enjoyed canning, baking, deer hunting (shooting a deer this last November) and fishing. He remained active through his entire life.

Wally was preceded in death by his parents; his wife Lucy in 1991; a son, Daniel Stetz in 2008; and his brother, Adrian Stetz.

To order memorial trees or send flowers to the family in memory of Wallace Stetz, please visit our flower store.