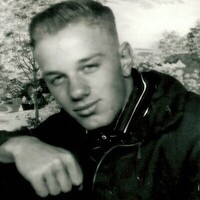 Visitation will be held for one hour prior to the funeral service.

Walter Kalmer Olson Jr. was born on June 24, 1940, to Walter Kalmer Olson Sr. and Calma Joann (Venstad) Olson in South St. Paul, MN. At the age 2 he moved with his mother and siblings to Barnesville, MN. He attended school in Barnesville. Following school Walter began working. During his lifetime he worked at SilverLine Boats in Moorhead, MN for several years. He also worked as a janitor at the Barnesville School and eventually the West Central Turkey Plant in Pelican Rapids.

On November 2, 1961, Walter was united in marriage to Joan Olson in Moorhead, MN. The couple made their home in Pelican Rapids and in 1972 moved to Barnesville, MN. Walter loved his family and enjoyed all the grandchildren's sporting events. Through the years, he spent time in the garden, shooting hoops with his kids in the driveway, and fishing. He and Joan enjoyed traveling, restaurants, casino visits, dancing, and Elvis. Walter will be remembered for his quick sense of humor, his quirky comments, and being light-hearted. To order memorial trees or send flowers to the family in memory of Walter Olson, please visit our flower store.