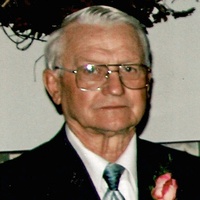 Wayne Leroy was born on May 5, 1926 to Stephen and Myrtle (Peterson) McEvers in Fargo, ND.  He grew up rural Elmwood Township, MN and attended grade school in Baker, MN and graduated from  Barnesville High School.  Wayne entered the US Army in 1946, doing his basic training in Fort Leonard Wood, MO and then was stationed in Hawaii for a couple of years.  He returned home to Minnesota to farm. Wayne was united in marriage to Grace Bredemeier on March 28, 1953.  They later moved to the Bredemeier farm where he continued farming for several years.  He also worked at American Crystal Sugar in Moorhead for 20 years.

In his younger years, Wayne and Myles Osborn were instrumental in getting the Red Birds Baseball team started in Barnesville.  He was a member of the American Legion in Barnesville, serving as Commander; was a lifetime member of the VFW and was also a member of St. James United Church of Christ.  Wayne enjoyed spending time in his garden.  During his lifetime, he also enjoyed hunting pheasants and fishing.

At Wayne’s request, a private family burial service will be held at Rosemound Cemetery, Barnesville.  Memorial suggestions are to the Barnesville Food Shelf, Hospice of the Red River Valley, or St. James United Church of Christ.